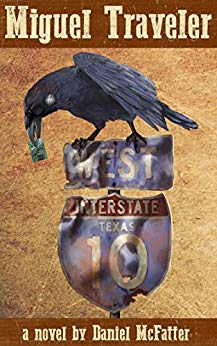 This interview was conducted by Chris Phillips on February 28, 2018.

Today I am interviewing the talented author Daniel McFatter.

NOTE: Some of the questions in the following interview with author Daniel McFatter contain potential spoilers for Miguel Traveler #1: The Man from Texas.

Chris Phillips: Why did you choose to write this in the first person?

Daniel McFatter: The interesting thing about this project is that, from the beginning, I heard Miguel’s voice loud and clear. Point of view was never considered. As soon as I began writing, Miguel was speaking. The very first thing that existed was this warm, rustic figure adrift in the milk, constantly telegraphing his thoughts to me. Everything else grew from there.

Chris Phillips: Why did you choose to use stream of consciousness?

Daniel McFatter: I think a natural biproduct of Miguel telling his story is that the narrative is expressed in the flow of his thoughts and feelings. But, there was no choice about how the story was told. The voice of the narrative was very organic, natural, and quite honestly the easiest part of telling this story.

Chris Phillips: Did you plan to leave it open to interpretation about whether the memories from the first life were actual events or not?

Daniel McFatter: That’s a very interesting question. I never considered that the 2011 chapters were up for debate as to whether they had actually occurred as Miguel recounted them to us. If we trust Miguel as a narrator, then we can reasonably accept that the events of the 21st century occurred as he described them. The more likely “up for debate” portion of the narrative always seemed to be the rather dream-like odyssey he was having in this devastated future where strange echoes and reflections from his past have a tendency to manifest in surprising ways.

Chris Phillips: As Miguel begins to understand more of what his purpose is in life, why does he keep questioning whether or not he is right about those understandings?

Daniel McFatter: Miguel awakens in a strange world under terrifying circumstances, only to discover that he has abilities and talents beyond anything he could have ever imagined. Couple that with having to reconcile very bad things that he did in the past, and I think you have a recipe for doubt and seeking answers, both within and without.

Chris Phillips: Why did Miguel not kill Redunzzle the wag-man after the Freds had pulled back?

Daniel McFatter: There are several reasons for this, the most immediate being that Miguel was bargaining for the life of the survivors. It is implied in the text that Redunzzle can in fact communicate with the entire merriment of Freds on unseen channels. (The wordless orchestration of gunfire, Redunzzle calling back the entire merriment, etc.) From that, it is reasonable for Miguel to assume that the Friends of Ed would be alerted if something foul happened to their leader, after which they would no longer be obligated to keep their distance or let the survivors leave the mountain alive. Secondly, once the merriment withdrew, Miguel’s only concern was finding what survivors he could and getting off of the mountain before the Freds returned. The other thing to consider is that Miguel and Redunzzle had an agreement. The Wag kept his part of the bargain. Why wouldn’t Miguel keep his?

Chris Phillips: Are simulants specifically defined or are they from single purpose to multi-purpose?

Daniel McFatter: Single purpose or multi-purpose are probably not the terms I would use. The simulant characters that we meet in the story are indiscernible from their human counterparts. One part of the narrative suggests that there are simulants geared more towards an overarching purpose, such as being someone’s lover, someone’s protector, or someone’s assassin. As tales in the Outfar continue, I’m sure we’ll meet more of them!

Chris Phillips: Is this the first in a series? If so, how many books are planned in the series?

Daniel McFatter: This is indeed the first part of a series. The second story is being written as of this interview, and I have concepts for a third and fourth volume in mind. But, at this stage, it’s just too early to tell about the overall length of the series. Or, from another point of view, Miguel hasn’t let me know just yet how many journals he has written in total.

Chris Phillips: Are the names of the people involved just made up or do they have a separate meaning?

Daniel McFatter: If you have suspected that many names in the story could be more than what they appear at a glance or on the surface, then I would say that you could be on to something! You’ll have to forgive me if I side-step de-mystifying that, as I’d like to leave some aspects for the reader’s own discovery. Side bar to that, the unique spelling of “Melissah” in the narrative is the self-styling of someone that was near and dear to me in life that passed away when we were younger.

Chris Phillips: Did you intend that Crunchy would plan an integral part in the future world, or was that simply a convenience at the end of the book?

Daniel McFatter: I’m not sure that Crunchy played an integral part in the post-apocalyptic narrative, but I would say that his presence at the end of the story was absolutely critical to Miguel’s journey, both as a reflection of everything he has suffered and fought for, as well as a hopeful concluding note on where the story could potentially go from here.

Chris Phillips: Is there some special significance to Horace and the fact that he has survived this long only to fall to the Freds?

Daniel McFatter: Brave men and women, truly wonderful people, die every day in terrible situations. People I’ve loved have died in terrible situations. For Horace’s end, there’s probably some of that sentiment there. Our heroes were facing a staggering no-win scenario at the Battle of Whistle Top. The casualties were heavy and Horace was among the brave dead. If you cared about him as a character, then I hope his death meant something, as it certainly did to me, while also bringing a sobering gravity to an all but hopeless situation.