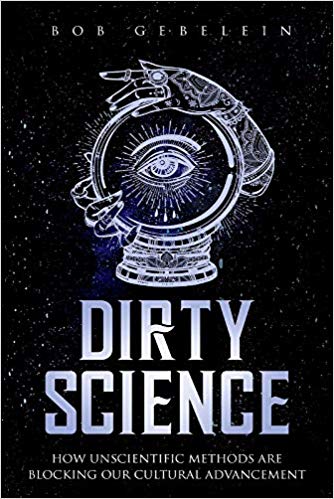 This interview was conducted by Nancy Eaton on March 25, 2019.

Bob Gebelein is our guest today, and I’m pleased he’s agreed to this interview in which you’ll learn more
about Bob and his book, Dirty Science.

Nancy Eaton: The title of your book is Dirty Science. Please give the readers your definition of dirty science.

Bob Gebelein: “Dirty science” is using unscientific methods such as ridicule, authoritarian pronouncements, refusing to look at the evidence, and power politics in the name of “science,” by persons with scientific credentials representing the most prestigious institutions, such as Harvard, Princeton, and the National Academy of Sciences. “Dirty science” is Richard Dawkins using the words “fruitcakes,” “silly,” “fabrication,” “unqualified hack,” “loony,” “egregious howlers,” “twaddle,” “nonsense,” “stupid,” and “silly-season drivel” to smear Richard Milton, instead of refuting his arguments in a scientific way.

Nancy Eaton: You talk about “authorities”. Tell us what you mean by this term.

Bob Gebelein: “Authorities” in quotes aren’t really authorities. Real authorities know what they are talking about. But people set themselves up as so-called “authorities” when they don’t know what they are talking about. We are predisposed to believe anybody who speaks or writes with authority (certainty) from the time we were small children and our parents were as gods to us, all-powerful and all-knowing. This is reinforced in school, where our job is only to memorize, not question, what the teacher is teaching. (And it is usually right.) In church we are taught to believe in an unseen God on the “authority” of God. Again, I put that word in quotes to mean so-called “authority,” because it is people teaching us what to believe, not God. Religion has assumed the role of explaining the unknown. Maybe the teachings of the seers are accurate, and maybe they are not, but how would we know unless we knew as much as they did (or pretend to know)? So “authorities” maintain their position because nobody knows enough to question them. Scientists have assumed the role of “authorities,” largely eliminating the unknown by claiming there is no reality beyond the physical. This is not science, but is a quasi-religious belief system, where scientists have assumed the role of priesthood, becoming false “authorities” in this area.

Nancy Eaton: In your book, you mentioned that you had a dream about your grandmother’s death one hour before you received the telegram. Have you had any experiences similar to this that you could tell us about?

Bob Gebelein:I have had a great many dreams of the future. The one that is documented was when I dreamed that GERALD FORD CARTER was a name of historical significance, many years before Congressman Ford was made Vice President. I printed those words on a piece of paper, for scientists to observe if they have appropriate dating methods. But establishment scientists don’t care, because they “know” that dreaming of the future is impossible.

Nancy Eaton: You stated that “money is power”. “Money determines, to a large degree, what academic people study.” Can you tell us why?

Bob Gebelein: I think this is pretty obvious. Money pays people’s salaries, and that determines what they do. A couple of the major psychic studies, the Stargate project at Stanford and the reincarnation research at the University of Virginia, were financed by large sums of money.

Nancy Eaton: Can you tell us more about your experiences with dream analysis?

Bob Gebelein: After I had completed psychotherapy to the satisfaction of my psychiatrist (1963, age 29), I read The Basic Writings of C. G. Jung (December 1966) and set out to explore my dreams in search of archetypes. But the dreams had an agenda of their own. They picked up where the psychiatrist had left off. Yes, I was normal, but I was not yet psychologically mature. I was psychological age 10, meaning that I was using only the mental potential I had at age 10, and this was normal for the culture. So I set out to analyze my dreams, trying to reach the psychological age of puberty, hoping my sex life would improve. This went on all winter, with a two-week break at Christmas. I had no job to go to, because I was living in Provincetown and was employed only in the summer, so I could do dream analysis 24/7, dreaming at night and analyzing all day. I reached the psychological age of puberty and enjoyed the resulting improvement in my sex life, and in the process resolved a major childhood traumatic experience that the psychiatrist had missed and also was introduced to the spiritual. My dreams and analyses were 880 pages, handwritten. This became my longest chapter in Re-Educating Myself (39 pages). My dreams showed me the greatest wisdom I have ever encountered, and I felt that the education I received from my dreams in 3 months was equivalent to my 4 years at Harvard or my 4.5 years of psychotherapy.

I asked myself, “What would happen if my interpretations of my dreams are wrong?” The dreams themselves answered that question. I was having dreams suggesting I might be a homosexual. That was no problem, living in Provincetown. I was adjusting mentally to life as a homosexual, when the dreams corrected me: There was a beautiful woman naked lying on a couch, absolutely drooling with desire for me. As I started towards her, suddenly I was in a car full of boys, teenagers or homosexuals, riding around town having a great time. But all I wanted to do was get back to that woman. I have never again thought that I might be a homosexual. And I have never again worried that my interpretations might be wrong. If your interpretation of a dream is wrong, the dreams themselves will correct you. I call this “The Self-Steering Process.” Most dream workers are familiar with it, but I have never seen it described in a book (except mine). Perhaps professionals in the field are being cautious. I believe I succeeded at this self-analysis only because I had developed skills and disciplines in my 4.5 years of psychotherapy. If you want to do this, please do this only under the guidance of a professional psychotherapist.

Nancy Eaton: Please explain to the readers the difference between a scholar vs. a creative thinker?

Nancy Eaton: At the beginning of Dirty Science you state “this book needs to be written”. Tell us why.

Bob Gebelein: Dirty science is a force that is blocking our exploration of whole dimensions of reality, the mental and the spiritual, in our accredited academic institutions. Yes, people are studying shamanism, for example, but this is not part of our official cultural knowledge, which is preserved in our universities, which convey this knowledge to 2 million graduates a year.

Our government has “checks and balances” to try to keep everybody honest. In our academic community, theoretically, all subjects should be debatable, and people can point out inaccuracies in other people’s opinions. But this doesn’t work. Ridicule keeps certain opinions from being heard, and even keeps people voicing those opinions from holding a job. I was innocent when I was in college. I thought academic people were unbiased and open-minded. Now I know differently. There are subtle social signals being sent to suppress nonconforming thought. People need to become aware that this is going on. For example, when I said that Eklal Kueshana’s teaching about evolution, that angels created new species by genetic engineering when the environment was ready to support those species, fit the data much better than Darwin’s theory, my mention of “angels” was met with extreme ridicule. This extreme ridicule creates a bias which prevents us even from exploring such possibilities. Academic people are caught up in the system. They are ruled by the ridicule. The intelligent reading public need to bring pressure from the outside.

Other books have been written on the subject. Alternative Science by Richard Milton is the best, in my opinion. But he is still engaged in rational debate. This issue is beyond debate. Smear tactics from people like Richard Dawkins are blocking debate. I want to get this message out to 100 million intelligent readers who will keep reminding the academic community that as long as ridicule rules they are corrupting our knowledge.

1. Is this an illegitimate argument (smear words, ridicule, Richard Dawkins above, etc.)?

2. Is this opinion based on replicated scientific studies?

3. Is this person qualified in this particular field?

How can the average person help to eliminate dirty science from our academic environment? You can simply ask whether they are studying precognition, telepathy, clairvoyance, psychokinesis, remote viewing, energy medicine, spirit entities, dreams, Carl Jung, Edgar Cayce, Eklal Kueshana, reincarnation, levitation, or the siddhis. When they laugh at you, you can inform them that that is not a scientific argument. You can ask them where is the scientific argument that makes all these things so ridiculous. You can just keep reminding them that they have a very limited view. Yes, they are all experts within their limited fields, but outside of those fields, what do they know, really?

Nancy Eaton: Do you have any new books planned for the future?

Re-Educating Myself, which was the product of a 30-year effort. Right now I have succeeded in getting Dirty Science in print after a 7-year effort. I am focused on the challenge of reaching 100 million people. I want everybody to be focused with me in that effort, because I can’t do it alone.

But yes, I plan to write Philosophy, a title which has become totally boring because of the efforts of Western philosophy to have almost nothing to do with the living of life. I am going to include the things I have learned in the 34 years (so far) since I published Re-Educating Myself. I am going to argue that American academic philosophy has become limited to what I call “the nit-picking argument” because of the same kind of in-group forces that have created dirty science. I am going to show how philosophy, or the application of the mind to the living of life, should include more than just intellect, but should incorporate scientific proof, probability theory, and psychotherapy. Yes, reason is still supreme, but reason is not all.

And then, not until I am 90, I plan to write my memoirs, Ego Trips. Yes, I had my years of depression and struggle, but basically, being born rich, white, male, intelligent, and good looking, my life has been mostly ego trips. I think people will enjoy the movie.

Thanks, Mr. Cobb, for your questions.