When the Beverly Hillbillies (the Cohens, not the Clampetts) moved to L.A. in 1995 with a strong interest in writing screenplays for movies—definitely not for TV—even then all they knew of television shows was what they read.

Back then, the BH’s couldn’t manage the simplest things in their new city, like opening the automatic door to the parking garage or figuring out how to order and pay in cafes or how to pronounce “La Jolla” or “La Cienega” or “Sepulveda.” They didn’t know how to respond when, after a two-minute drizzle, a cashier asked them, “Can you BELIEVE this weather?”

The only rental that accepted their three barking cairn terriers was a small condominium complex in Santa Monica seventeen blocks from the ocean. Soon Mrs. Hillbilly observed an interesting resident, a pretty blonde women in her twenties who was picked up in front most afternoons by a limo. Her hair was usually wet, and she wore nothing special, maybe a T-shirt over black tights. Mrs. H. also saw deliveries—unmistakably screenplays—dropped off at the mailboxes by CAA, the top agency for anyone in the biz, but she did not recognize the name of the recipient, and there was no internet then to google it. One afternoon while she was walking the dogs, she saw the limo pick up the pretty blonde dressed in a fabulous ball gown with her husband in a tux and wondered aloud what the big occasion might be.

The big occasion was the Emmy’s, she learned the next day from reading USA Today, and the pretty blonde was in the cast of the TV show FRIENDS. She played a character named Phoebe.

As time passed in L.A., the Beverly Hillbillies became savvier, buying rollerblades for fun and transportation, learning what to order in restaurants, and using shortcuts on surface streets to avoid heavy freeway traffic. They had celebrity sightings now and then… Donald Sutherland, Denzel, Julia Roberts, John Ritter, Kramer, Barbara Hershey, Arnold and Maria on bikes, The Incredible Hulk, Dennis Hopper, Keanu Reeves, Carl Weathers, Oliver Stone, Laura Dern, after awhile no big deal, the same as any other human being living there.

They came to exchange tales of “Brushes with Greatness” with long-standing friends who had also moved from Mississippi. For a time, during the Clinton impeachment, the friends were far in the lead, having experienced a Brush with Greatness of spectacular notoriety when they spotted Paula Jones and her lawyer getting out of their limo at a restaurant. But that changed.

The Bev. Hillbillies moved from their condo in paradisiacal Santa Monica to a tiny (435 sq.ft.) cottage in Venice, even closer to the ocean. Venice had not yet regentrified, and serious gang wars were underway—police helicopters roaring twenty feet above their cottage night after night, a pistol emptied into one gangbanger four houses down the block after midnight, a chef at a 5-star restaurant ambushed and murdered three blocks away as he walked to his car, young and robust Latinos and blacks swaggering past us with their tensed-up pit bulls on choke collars.

To offset these minor drawbacks, the rent was only $650 (versus $1,500), we were fast blowing through our savings, and the cottage had a fenced backyard so that five daily dog walks were no longer necessary. The move was an L.A. no-brainer. We stayed there seven years.

There were three cottages on the property, and renters were moving in and out of the others with regularity. A heavy-set black man, 30’s, taciturn, moved into the back cottage with his girlfriend, Daniela, a waitress at the 5-star restaurant where he was chef. For some reason Daniela moved out a few weeks later and was seen no more.

Late every night the chef would pass our cottage as he walked to his own in back, carrying his precious set of knives home, as chefs often do. We said hello to each other but little else. We longed to eat at his restaurant, of course, but a few years would pass before the money train would make a stop at our door. During the day we noticed a few odd visitors to his cottage—absolutely gargantuan black men who emerged from their black Lincoln Navigator SUV’s, and another time, a very tall, light-skinned teen boy whom he introduced as his brother.

After a few years we were surprised to see that Jason was moving his belongings out to a truck and told him goodbye and good luck. It seemed inappropriate to ask where he would go. Of course, the instant I saw our landlord, always voluble, I mentioned Jason and waited to hear more.

“Oh, I think Jason will always live in the shadow of his father,” he offered.

Our landlord looked at me incredulously. “No, Kathy. His father is O.J.” 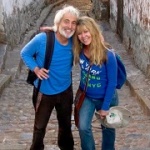 Kathy and Edward Cohen are the authors of Blood Relations. To find out more about this book, click here.