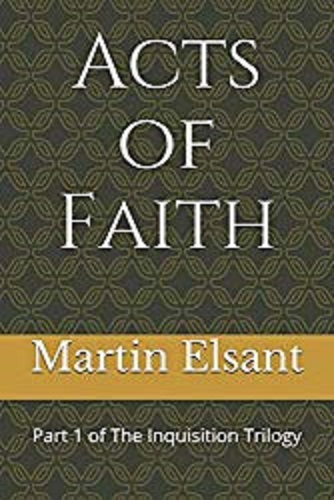 The British Jewish historian Cecil Roth, who was educated at Oxford, wrote a book that was of special interest to author Martin Elsant. The book was entitled History Of the Marranos and of the many figures covered in it was one Diego Lopes of Pinancos in Coimbra, Portugal. Ironically, Mr. Elsant is a former radiologist living in Jerusalem and Mr. Roth died in Jerusalem in the year 1970.  Purchase Here.

While much of ACTS OF FAITH is dedicated to the descendants of Diego Lopes, Martin Elsant includes two quotes prior to his Author’s Notes from different sources. One in particular I found quite interesting: “Folded under the dark wing of the Inquisition…the influence of an eye that never slumbered, of an unseen arm ever raised to strike. How could there be freedom of thought, where there was no freedom of utterance? Or freedom of utterance, where it was as dangerous to say too little as too much? Freedom cannot go along with fear.” – William H. Prescott, The Age of Phillip II and the Supremacy of the Spanish Empire, 1858.

It is easy to pick up a history book or click on Wikipedia to find out about Diego Lopes. I prefer, whenever possible, to read historical fiction — an infusion of actual history within the opportunities that allow for creativity when re-examining historical events. I believe that this is what Martin Elsant is doing with ACTS OF FAITH, retelling historical events during one of the most difficult times in human and religious history — The Inquisitions — in such a way that it feels as if the reader is enjoying a book of fiction, filled with all the expected plot twists and turns.

The story we are following involves Maria, the daughter of Diego Lopes, and a young man whom she is quite fond of, Aristedes or ‘Ari’ Coelho. Ari had a difficult life, having to watch his parents succumb to the Black Plague when he was only twelve years of age. His Aunt and Uncle already had six children and were unable to take on another so Ari ended up spending his ‘orphan’ time living with the village priest, Father Affonso. It was perhaps this experience at such an impressionable part of his life that led Ari to join the Seminary as soon as he was old enough to.

When and Ari and Maria met she was immediately fond of him. He enjoys having biblical discussions with her, beginning with an explanation as to why the bible was not just meant for kind-hearted souls such as hers but also for sinners like himself. Regrettably, it was The Inquisitions that brought about a short falling-out period for Ari and Maria. One of Diego Lopes’s servants, Pedro, is taken by one of the Inquisition Familiars. Being a servant with no political influence, Pedro was unable to fight against the planted evidence used to imprison him. Pedro soon becomes one of the many victims of The Inquisition when he is tortured to death. Maria finds Ari and they have a heated discussion over this matter — heated only because Maria asked Ari if the Inquisitors who tortured Pedro to death were sinners and he indicated that, while they may have made unintentional mistakes in the case of Pedro, they did not sin.

Part of Ari’s seminary training included a tour of the torture chambers used by the Inquisitors. It is but the first thing that begins to slowly change his feelings about the entire Inquisition process. The Bishop, having been privy to Ari’s slight change in attitude, sits him down for a good talk. It is during this talk that Ari’s mind is made up — what the Inquisitors are doing in the name of God is nothing but absolute, unadulterated evil. The question was, how does he fight it from the precarious position he is in?

Ari learns of people being tortured just because of their contrary religious beliefs — like those of the Jewish faith celebrating the ritual of fasting during the high holy day of Yom Kippur. Ari knew that it was not just one evil Church leader but an entirely evil system that needed to be stopped. The trouble was that the Inquisition Familiars in Portugal were trying hard to emulate those from Spain — and the Spanish Inquisitions were no Monty Python sketch but one of the most deadly events in European history. The story takes a big turn when Ari’s old friend Maria finds him and tells him that her father, Diego, has been arrested as part of The Inquisition. She begs him for help, but as much as he would like to, Ari realizes there is little he can do.

The case against Diego Lopes is weak, and he is defending himself during the trial. When asked, he indicates that the only reason why he has been called out by the Inquisitors is because he has been accused of Judaizing. Things did not look good for Diego. This was a period in human history where there was not much sympathy for those who were feared. These people were simply eliminated, much in the same way that over 50,000 ‘witches’ were killed in neighboring European countries. While Diego spent months in prison, Maria spoke with Ari in fear that it was just a matter of days before he was executed.

Maria begs Ari to try and help indicating he is her last hope. It is tough for Ari to disappoint her, but there was really nothing he could do that would not find him in the same position as her father. At the same time, Ari finds is difficult to understand her proclamations that Judaism is superior to Christianity — his seminary teaching and upbringing responsible for his stance. Regardless, the latter part of this book is a retelling of the plan made to free Diego and make an escape away from Portugal. Some readers may already know of Diego Lopes’s fate but I will not spoil that here and encourage all to pick up this book from Martin Elsant and settle in for the ride in what represents the first book in the Inquisition Trilogy.