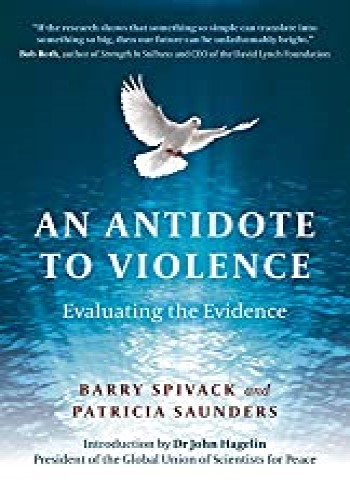 “An Antidote to Violence: Evaluating the Evidence” is not your casual mid-afternoon read. It is a thought-provoking and in-depth presentation of a still-controversial topic, Transcendental Meditation (TM). The authors, Barry Spivack MA and Patricia Saunders Ph.D. have created a monumental piece by critically analyzing decades worth of scientific research on the social effects of the practice. After a careful evaluation of evidence, the authors conclude that there is indeed an antidote to violence. Purchase Here.

This universal antidote is accessible to all and completely free. While this might sound like oversimplifying a vastly complex and far reaching issue, that is not necessarily so. While researchers have linked group meditation to measurable growth in social welfare (under different forms), they do not consider the TM effect the sole cause of these measures. Rather, they view it as part of a complex web of forces which govern the world and life as we know it, yet, often fall beyond our regular conscious grasp.

To those less familiar with Maharishi Mahesh Yogi and his teachings, there is ample opportunity to acquaint yourself throughout the pages of the book. Barry Spivack and Patricia Saunders take a peek behind appearances and explore the science behind this elusive phenomenon. They gradually walk the reader through different scientific experiments and statistical analyses of growing complexity to answer a set of questions and consequently ask new ones.

By bringing to the forefront a series of socio-psychological experiments that offer perceivable proof of decrease in violence and increase of social welfare, “An Antidote to Violence: Evaluating the Evidence” aims to attract the attention of both individuals and governments to this feasible antidote. Organized groups have ventured into volatile war zones to bring outer peace through their inner tranquility. And they seemingly succeeded time and time again.

The authors discuss in-depth the implication of paradigms in the history of ideas, mainly paradigm shifts. Discoveries and systems of thought that did not conform to the mainstream view of the time were often first ostracized before being accepted as groundbreaking leaps. The historical contextualization outlined by the authors acts as a possible explanation of why the TM continues to be met with resistance by so many. It simply does not comply with our modern Occidental view on reality and the self.

“An Antidote to Violence: Evaluating the Evidence” is somewhat similar to a meta-analysis, in that it collects a vast body of academic literature and analyzes the data and results presented. However, it is far from being a sterile statistical account, as it is deeply infused with the passion of the authors. Although starting from different fields (Philosophy, Politics and Economics, and Music respectively), both Barry Spivack’s and Patricia Saunders’ life journeys merge in the blossoming universe of Transcendental Meditation.