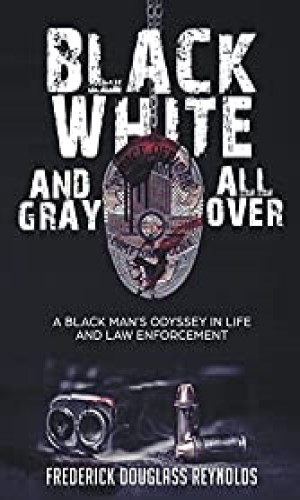 If you are looking for an exploratory journey into the many dimensions of gray, look no further than “Black, White, and Gray All Over:  A Black Man’s Odyssey in Life and Law Enforcement” by Frederick Douglass Reynolds. The author goes beyond the dichotomy of good and evil – from within an individual, institution, or community – to investigate this precarious and uncomfortable in-between state. Purchase Here.

This memoir is not a comfortable read. It is a daring tale that bravely exposes the inner workings of an individual. The book goes even further, piecing together a puzzle of the many faces of humanity painted in blood and gore, but also acceptance, kindness, and love.

Frederick Douglass Reynolds took a circular approach to his life story, starting from his childhood and closing with his golden age, and this embracing fleeting decades of the life of a community. The opening pages provide a closely intimate look into the upbringing of the main protagonist inviting the readers to observe his family life and the community in which he grew up.

While circumstances seem to be pulling a young Reynolds into a life of crime, deeper down into the underbelly of society, counter-acting forces – a fortunate combination of willpower and helping interventions – have led him to a path of serving others and the community. Despite being exposed to gangs at an early age and committing minor crimes, Reynolds successfully defeats a predestined fate looming over him.

It is a difficult battle; one that involves family struggles, several failed relationships, periods of unemployment, and homelessness – all followed by a deep sense of lack of purpose. However, Reynolds relies on resourcefulness and deep determination to find and walk on his life path.

We are invited to follow his professional evolution from recruit to detective. During his vast career with the police department, he uncovers the many faces of evil and crime in Compton. The author shares his in-depth knowledge of the history of local gangs and organized crime. However, he proves to also be somewhat of a rebel scholar in the psychology of human behavior and crime.

From chasing down thugs, solving elusive crimes as a detective, and exposing police and political corruption, Reynolds’ career is filled with vivid depictions of heroics. Yet, the lesson that resonated with me the most was the value of small good deeds. Regardless of the role we play in society, micro-good deeds are within our reach and these often have macro reverberations.

“Black, White, and Gray All Over” is a beautifully weaved narrative of a police officer’s memoir interwoven with raw introspection. As the title suggests, it is the memoir of a black police officer. This is all the more relevant considering the socio-historical background for the book, mainly 1960s’ Detroit and the volatile 1980s’ Compton, California. Yet, as the author underlines, as well, while the story touches on issues of racism, it is about so much more than that.