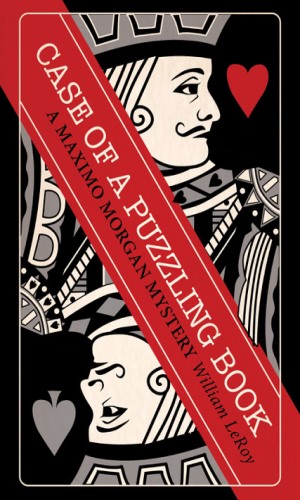 Case of a Puzzling Book: A Maximo Morgan Mystery by William LeRoy is a tricky mystery told in a uniquely creative format. Readers are immediately drawn into a rollicking adventure set off by the actions of a baldheaded stranger who goes into the Twisted Sister Coffeehouse in the small town of Henryetta, Oklahoma. Popo Crowder owns the coffee shop that includes a free library book exchange with erotic novels and similar literary fiction as part of the collection. The literary works on the bookshelves are regarded with antipathy by Eppie, her twin sister. Eppie is part of a group that “edits” books of an “objectionable” nature. The differing points of view between Popo and Eppie have created a rift in the sisters’ relationship, which comes into play in the story. Purchase Here.

When the baldheaded stranger takes Lady Chatterley’s Lover by D.H. Lawrence and leaves The Same Old Story by William LeRoy in its place, Popo is perplexed as to why words and sentences are missing from pages in the book. Popo hires private detective Maximo “Max” Morgan, whose role model is private investigator Brad Runyon, a character created by novelist Dashiell Hammett. Popo asks Max to look into why The Same Old Story is the target of intentional defacing of parts of the text. Is there more to the case than meets the eye? Will Max figure out who might be responsible for the vandalism and the purpose behind it?

Case of a Puzzling Book is told from three perspectives, with each chapter focusing on one character’s point of view. Readers gain a deeper insight into each of the characters’ thoughts, feelings, and motivations as they go through experiences in their lives with a common thread that weaves them together. The author’s creative use of lingo makes the characters stand out in their behaviors, actions, and mannerisms.

As the story progresses, the case takes many twists and turns, adding layers of intrigue that will keep readers glued to this highly captivating mystery interspersed with humorous moments. LeRoy keeps readers on their toes guessing which one of many reasons accounts for the defacing of pages in The Same Old Story. All the literary works mentioned in the story tie in beautifully with the storyline. The nameless junior high student interacting with Max is a great sidekick. Music symbols representing notes add a nice touch. There are clever analogies of biblical characters with fairy tale and nursery rhyme characters. The author does not include an overabundance of curse words, and they fit the story’s tone.

LeRoy has written a mystery with an unexpected twist at the end and an underlying ambiguity as to whether William LeRoy is a fictitious name.