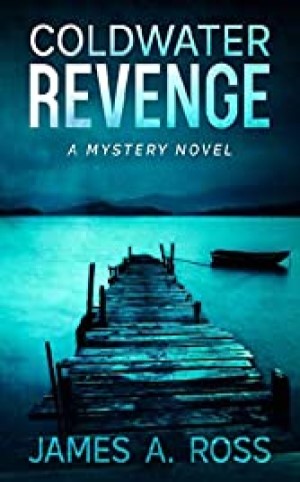 Coldwater Revenge takes place in 2002 with the setting in a lakefront community along the Canadian border. Tom Morgan, a high-powered New York lawyer, has taken a break from his job to spend time with his family. He is at a crossroads in his life and trying to choose the path he wants to follow. Shortly after his arrival in the small town of Coldwater, the body of a local man is discovered in the lake. Sheriff Joe Morgan, Tom’s younger brother, recently lost his staff and is the sole police officer in the town. Joe enlists Tom’s help in what turns out to be a high-profile murder case. During a meeting at Tom’s law firm, he finds out that a case from years ago in which he was only peripherally involved could cost him not only his job but also jail time. Time is critical for proving his innocence, but Tom refuses to leave Joe without support. Purchase Here.

When Joe becomes critically ill due to his exposure to a deadly toxin, Tom takes over the investigation, and his theories and probing questions put him in the uncomfortable position of questioning the likelihood of whether his brother or Susan Pearce, the sister of the victim, could be involved in the complicated case in which a bio-research company is also entangled. Career choices along with personal and family relationships all point toward Joe’s and/or Susan’s possible guilt. While working on the case, Tom not only is dealing with inner turmoil, possible career implosion, family differences, and his feelings toward Susan, his ex-girlfriend, but he also winds up in precarious situations that lead to life threatening danger. Will Tom escape perilous predicaments and identify the killer? Is there a potential bio-terrorist plan afoot and can it be stopped? Will Joe’s body succumb to the poison?

James A. Ross has put together a disparate group of compelling characters, each with their own agenda, who share a connection with one another that include positive and/or negative relationships. Readers gain insight into the motivations behind characters’ behaviors and reactions. The story is true-to-life in painting a picture of how a small-town sheriff skirts the edge when it comes to following the letter of the law by allowing some illegal activities to go unpunished and the subsequent fallout. Ross does a terrific job in the use of imagery and figurative language to bring the characters and storyline alive and make for a richer reading experience.

Ross draws readers in with a terrific opening line and holds them spellbound while reading this spine-tingling and suspense-filled page turner. It is a roller coaster ride for readers as they are shocked, mesmerized, and fascinated all at the same time. This riveting story includes lies and betrayal, violence with intent to maim or kill, alleged clergy misconduct, ups and downs of family relationships, secret oral language, suspected bioterrorism, moral and ethical issues, underhanded dealings, personal dilemmas, and a small amount of swearing. Coldwater Revenge is most definitely a top shelf-worthy read and a great debut of the Coldwater Mystery Series. I look forward to the release of Coldwater Confession, the second book in the series.