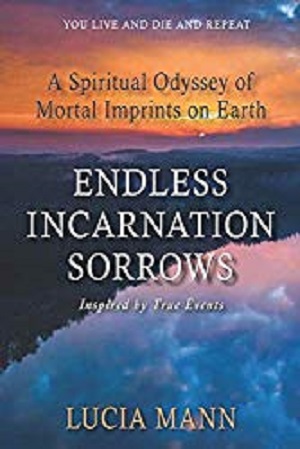 Endless Incarnation Sorrows is a daring literary feat of an intergenerational tale that closely follows a soul across its rebirths. Triggered by true events, Lucia Mann shares her personal insights into what was and what might come to be. Following repeated resuscitations, she starts un-forgetting her previous selves. Thus many seemingly disconnected lives scattered across time and space are connected by an invisible string that pulsates throughout the pages of the book. Lucia Mann takes us on an inspirational inward journey, by unveiling the darkest corners of her past and present. Purchase Here.

One of the features that makes the read stand out is how gripping all the characters are. Since, the main players shift between the scenes of this play of life, the reader has a narrow window of opportunity to become emotionally invested. Yet, Lucia Mann successfully outlines convincing and enticing personages that faithfully act out their destiny in front of our eyes. And through these harsh lives we can see and to a certain extent even feel some of the hardships that plagued humanity and continue to do so. The first incarnation, Lala bares the burden of her parents’ incest and her desert exile ends in enslavement; Lyveva surpasses her victim status branded upon her by Vikings to become a healer; Lucja experiences the lowest and highest of humanity within the Auschwitz fences.

The sands of time uncover various taboo subjects, ushered away by our consciousness, such sensible subjects that we would much rather turn a blind eye to. While these practices are presented in a contextual fashion, as an integral part of a certain period in history, some survived into our present under various forms, themselves being subjected to a string of reincarnations. Behind the front narrative of survival and redemption of a lost soul, there is a strong underlying outcry for the incarnation of social practices that embrace numerous souls.

All in all, Endless Incarnation Sorrows is hard to put down; there is always an immediate sense of peril or surprise on the next page. While, the subject and the writing style makes the read appealing to a wide audience, there are some details that steer the direction toward an adult or young adult group. Lucia Mann does not shy away from topics that are now deemed taboo and this piercing truthfulness might just be the secret ingredient that keeps the reader on this magically painful and eye-opening journey that the author initiates.