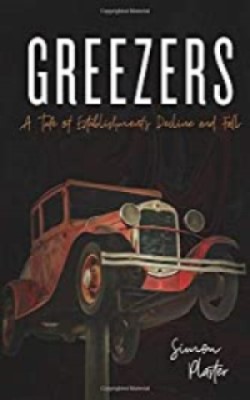 GREEZERS: A Tale of Establishment’s Decline and Fall

Henrietta, a former newspaper reporter, answers a want ad and is given the opportunity to play amateur sleuth when she is hired by erstwhile lawyer Leroy “Lero” O’Rourke to help in his surveillance case involving the prominent DeGrasso family. What starts out as a simple case turns complicated when Henrietta and Lero find themselves in the middle of a high-stakes competition. The race is on as to who might take over the reins of the family owned lube business when the ninety-five-year old family matriarch, Nanette DeGrasso, gives up her position of leadership either due to retirement or death. There are two main contenders for assuming control of the Oklahoma City based company. Charles DeGrasso, Nanette’s son, considers himself not only ready to undertake the role of Chief Executive Officer but also firmly believes that he has been the rightful heir apparent for decades. However, Joe DeGrasso, Nanette’s nephew, is of the opinion that he is a better choice as the successor, and he has already launched a business venture that could impact the company’s bottom line if customers embrace it. With the venture off to a disappointing start, will sales revenue increase? What risks, both personally and professionally, are the two competitors willing to take in order to achieve their dreams of running the family business? As Henrietta and Lero get pulled deeper into the intense family rivalry, how much will the stumbling blocks they encounter hinder their efforts to bring the case to a satisfying conclusion? Purchase Here.

Anyone who has read a story penned by Simon Plaster will recognize his unique writing style and how each of his exceptional stories is imbued with its own unmistakable personality. In Greezers: A Tale of Establishment’s Decline and Fall, the focus is on the effect greed and a sense of entitlement have on people to obtain what they desire and how far legally and ethically they will go to make it happen. Plaster does an excellent job of showing the discord caused by external and internal pressures, in both serious and humorous ways, which occurs between individuals faced with life changing events. The skillful use of literary devices and sensory language help readers connect with the characters and the world they inhabit. All of the characters are true to real life, and each one has their own distinct personality type. Also, readers get an inside look into the behavioral reactions of the characters to the situations in which they find themselves.

Plaster has once again written an intriguing and captivating story involving human interest topics that pull readers in from the beginning and hold their attention until the last page. Readers will appreciate the “Grease Monkey Business” bulletins that tie in wonderfully with the story and keep readers apprised of the public’s view of the DeGrasso family members and their owned and operated business. One of the many engrossing scenes, which reference works of literature, movies, and noteworthy individuals and are pertinent to the storyline, is one in particular where Plaster compares the romantic and competitive relationships between some family members in the novel to the roles people played in a medieval work of literature. The scattering of musical interludes harmonizes with the story in a befitting manner. Greezers is a terrific addition to Plaster’s collection of works.