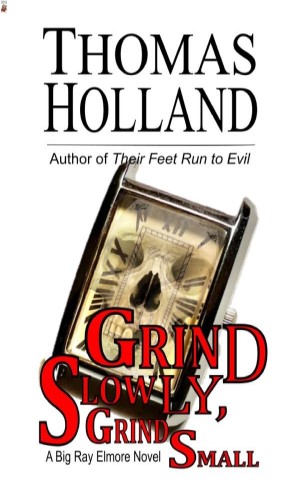 Grind Slowly, Grind Small is the second novel by Thomas D. Holland set around Big Ray Elmore, a small-town police chief from Split Tree, Arkansas. You don’t have to have read the previous novel in the series, Their Feet Run to Evil, in order to enjoy this gritty crime drama. However, once you have finished reading, don’t be surprised if you find yourself immediately looking to get more of Big Ray Elmore in your life. Purchase Here.

Grind Slowly, Grind Small primarily takes place in 1960 and focuses on the discovery of some old bones dug up during a construction project. The discovery leads Big Ray on a dark path to uncover the truth and bring justice to the long-dead victim. As one would imagine in a small-town murder case, Big Ray is tasked with investigating people he has known his entire life.

Thomas D. Holland does a superb job of making the reader feel like they are in the room with Big Ray every step of the way as he pursues answers about this mysterious skeleton. The picture painted of a small Arkansas town in 1960 is vivid, and the reader is transported back in time. The characters that Holland creates are well fleshed out and easy to visualize. You can almost feel the summer heat and taste the refreshing iced tea as sweat rolls down your cheek.

Big Ray Elmore seems to get his name both from his stature and his status. The town and nearly everyone who knows him revere him as a war hero for his actions in WWII. He commands great respect without asking for it. However, this small-town police chief is his own harshest critic. While others focus on his achievements, he struggles with his shortcomings. He is filled with regrets and caught in between his past and present.

Grind Slowly, Grind Small focuses a lot on the concept of justice. Chief Elmore knows that, sadly, the world is rarely a just place, and despite being an officer of the law, he understands that the system often fails to balance the scales. You will find yourself eagerly devouring this novel as Big Ray does what he can to even things out a bit in his little corner of the world.