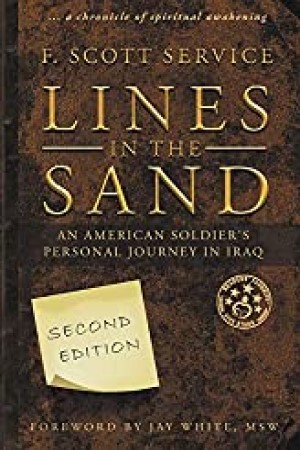 F. Scott Service extends an open invitation to step into the mind of a soldier at war. “Lines in the Sand: An American Soldier’s Journey in Iraq” is based on the journal entries kept during the author’s service in Iraq. It offers a unique and very intimate look into the thoughts and emotions brought on by a world falling apart. Purchase Here.

The memoir was triggered by F. Scott Service being deployed with the US Army to the Iraq war. He was stationed at Camp Anaconda, where he served as a specialist in hydraulics mechanic, mainly focusing on repairing helicopters. At camp all daily activities are strictly regimented by the greater power of the US Army. The few days off that soldiers enjoy offer very limited display of freedom. However, in parallel, he followed his calling and passion as a writer, tirelessly documenting the daily life of a soldier.

A recurring theme of the book is the concept of conscientious objector and its repercussions. Scott is faced with this questions once at the beginning of his story and once towards the end. Each time the answer would be a major turning point for future events. However, what is truly intriguing to follow is what happens in the meantime; how his experience of war consolidates his theories and belief system. During his deployment, F. Scott Service faced an internal war of his own. Relentlessly he tried to reason with the seemingly unreasonable Iraq War, hoping to attribute some meaning to complete chaos.

As the world was seemingly falling apart around him, so the life he knew was crumbling. The life he built over years with his soulmate, Rita, began showing cracks that shook the whole structure of marriage. A structure that was solid before, now was dissolving somewhere in the geographical distance between the spouses but also the ever-expanding distance between their souls. Two beings who lived in symbiosis for so long, were faced with two very different realities that they experienced alone.

Finally, “Lines in the Sand: An American Soldier’s Journey in Iraq” also sheds light on the many struggles that veterans face. The shadow of war is long and those who participated in it rarely walk out from under it. The only thing left to do is learn to live with it, to somehow integrate the experience and find light wherever it is possible.