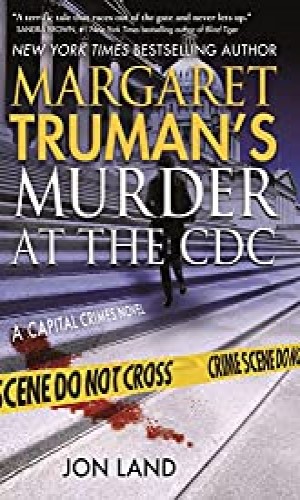 I’ve reviewed more books by Jon Land than I can count but his latest, MURDER AT THE CDC, stands out for all the right reasons. Purchase Here.

And all the wrong ones, too.

That’s because the book, completed prior to the January 6, 2021, eerily explores the very mindset that made that chaotic, violent day possible. Not only does the book open with, yes, a mass shooting on the steps of the Capitol Building, it centers around a crazed plot by unified militias and extremist groups to wage what is essentially a second civil war to seize power forever.

Five years ago, we learn in the prologue, a tanker carrying a deadly bio-weapon called the “White Death” seemingly vanished into thin air. Once those contents fall into the hands of an unscrupulous politician eyeing the White House and the powerful offspring of a famed televangelist, all bets are off and a fanatical plot that dwarfs January 6 is underway. We’ve seen the politician, Senator Byron Fitch, before. It’s a classic thriller trope and there’s nothing new there.

What is new, and fabulously so, is the character of Deacon Frank Wilhyte, a man forever living in his dead father’s shadow who finds himself repeating the same mistakes with his own son. Deacon Frank’s murderous tendencies, we learn, were passed on to the boy, making them probably the oddest of father and son couplings ever seen in the genre.

At the heart of MURDER AT THE CDC, though, is its protagonist Robert Brixton, whom Land inherited from previous entries in the late Margaret Truman’s penultimate mystery-thriller series, but enhances substantially here. Brixton is drawn into the action when his grandson is nearly killed in the aforementioned Capitol shooting. That comes after Brixton meets, at his best friend Mackensie Smith’s behest, Mac’s long-lost daughter who’s troubled by something she’s uncovered at the, you guessed it, CDC where she works.

Brixton, in tandem with wronged Baltimore detective turned Capitol cop Kelly Loftus, trace the terrible truths of the Capitol shooting to its roots on Deacon Frank’s doorstep. This as even more terrible truths are revealed about the White Death’s capacity to kill millions of Americans by the bio-weapon’s wheelchair-bound creator. Around for the ride, once again, is the shadowy government fixer Brixton calls Panama, as well as the eccentric, pigeon-loving scientist known only as the Professor. Good thing because Brixton is going to need all the help he can get.

All of that combines to make the 32nd book in this stellar series a can’t miss, can’t put it down, absolute stunner of a tale guaranteed to chill you to the bone. In Land’s able hands, Capital Crimes has regained the fervent pace and keen plotting that once made these books perennial bestsellers. Jam-packed with action and intrigue, MURDER AT THE CDC is as riveting as it is relentless and relevant. An early pick for the best thriller of 2022.