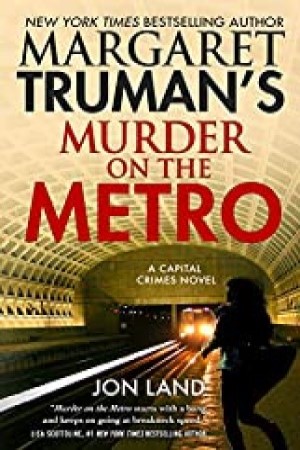 “You need to get somewhere safe,” one character tells another late in MURDER ON THE METRO, to which the other responds, “I don’t think there is such a place anymore.” Purchase Here.

That should come as no surprise, given that Jon Land has picked up the writing duties in this 31st book in the New York Times bestselling Capital Crimes series originally conceived by Margaret Truman. After all, Land is no stranger to high stakes thrillers in which the country, or entire world, hang in the balance. In MURDER ON THE METRO, those stakes include the United States government which is about to be overthrown.

Yes, you heard that right. Known for tearing his ideas from the headlines, Land actually writes his own this time out, having the prescience to pretty much predict what we all witnessed on January 6 when a mob descended on the Capitol. And the result, from an entertainment standpoint, is one of those rare literary sure things. A can’t-miss, can’t-put-it-down, can’t-believe-I’m-reading-this thriller that clicks on every level.

Land retains series vet, and international private investigator, Robert Brixton as the book’s lead, albeit with a bit more of an edge and heightened skill set. That makes him a fitting counterpoint to one of the book’s two heroines: Lia Ganz, a former Israeli commando who comes out of retirement to track down the terrorists responsible for a horrific beach attack in Caesarea. There’s also Secret Service agent Kendra Rendine, head of the female vice president’s security detail and a friend of Brixton’s.

They move in the same circles, those circles converging when Rendine suspects that the vice president’s death to a heart attack was actually foul play. It’s left to Brixton to uncover the specific means and manner, even as he comes to realize an implicit connection between the murder of the vice president, that strike on Israel, and an attempted terrorist attack on the Washington Metro that he thwarted (hence the book’s title).

That connection brings him to the White House itself and a scheming first lady dealing with her husband’s diminished mental capacity on the eve of an election, but not before Brixton and Lia Ganz break an 80-year-old nun out of federal prison. Turns out Sister Mary Alice Rose, a committed social activist inspired by the real-life exploits of Sister Megan Rice, is the only one who knows how all the pieces fit together, the glue coming in the form of a plot to murder millions of Americans.

The stunning and stupendous MURDER ON THE METRO is one of those books that’s so much fun you hate to see it end. Featuring the perfect blend of action and intrigue, plot and character, pacing and suspense, here is a template for how thrillers are supposed to read. Coming in lean and mean at 288 pages and featuring Land’s patented short, cliffhanger-rich chapters, get ready to plunge into the best political thriller in recent memory.