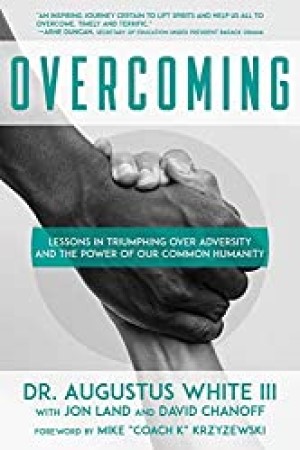 I wonder when the esteemed African-American orthopedic surgeon Augustus White III conceived the idea for his book OVERCOMING if he had any idea how current events would conspire to make this an absolute must-read. Indeed, the combination of political turmoil (putting it mildly) coupled with a raging pandemic have left all of us with challenges we’ve never faced before. Something to overcome, in other words. Purchase Here.

This is a book a man of Dr. White’s background and repute is uniquely suited to write, given his own inspirational and groundbreaking history. Known as “the Jackie Robinson of orthopedics,” he was the first African-American medical student at Stanford, the first black surgical resident at Yale, the first black professor of surgery at Yale, and the first black chief of service at a Harvard teaching hospital. Dr. White has truly lived a life of “firsts,” breaking barriers and overcoming adversity every step of the way. And now he’s sharing the lessons of that journey with all of us, on the occasion of Black History Month no less.

I so enjoyed his own story in OVERCOMING, but this is not a book that focuses on him. Instead, the attention turns to twenty everyday heroes who’ve overcome levels of often incredible adversity, usually with the help of others who may be friends or strangers. That’s where the “Common Humanity” part of the subtitle stems from.

There are athletes in the form of a paralyzed wrestler who recovered to become a champion and a female football player who went on to become the first ever Division One college football position coach. There are doctors in the form of the first African-American orthopedic surgeon and an oncological orthopedist who also served as an astronaut. One of the Lost Boys of the Sudan is featured, along with a transgender young man, a blind psychotherapist, two sets of parents who lost children, a family raising a disabled needs child, a one-armed female champion weightlifter, an advanced stage lung cancer survivor and a whole bunch more who make our everyday problems pale by comparison.

In these turbulent times, they are examples for us all, serving to make OVERCOMING the first must-read book of 2021. Not only do the twenty profiles entertain, they also inform. We come away with a unique appreciation for the strength and power of the human spirit, reinvigorated ourselves by the hope these stories provide. If the subjects of this book can overcome the likes of the examples above, then we can plow through the residue of political strife and a pandemic that won’t let go.

And that’s the whole point of OVERCOMING. The legendary Studs Terkel used a similar approach with both “The Good War” and “American Dreams Lost and Found,” and I haven’t found another comparably themed book that approached the greatness of those until OVERCOMING. Its message will inspire you, its lessons will leave you humbled, and its stories will stay with you long after the final page is flipped. Here is a tour de force of style and substance, a contemporary classic on the human condition that will be read for many years, and crises, to come.