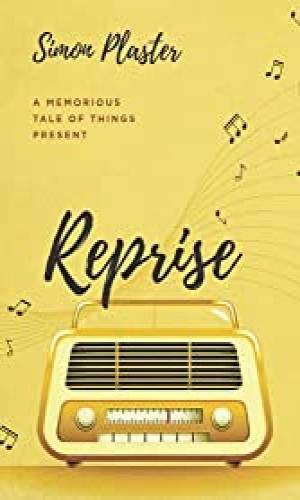 Reprise, by Simon Plaster, continues his series of humorous and satirical novels about Henrietta Hebert, who has gone from being an investigative reporter to now being a Private Eye. She figures that being an investigative reporter is not that much different, in that she digs up the dirt on the people she writes about, just like detectives discover all sorts of secrets about whoever they are investigating, and she might as well get the credit for solving a crime or mystery that some inept detective would claim. otherwise. Purchase Here.

The trouble is that, at the start of Reprise, Henrietta is not getting any bites. That is, not until one day, a fateful knocking at her door and buzzing at her doorbell launches her new career. When Henrietta answers the door, she sees a woman standing there who introduces herself as Dr. Gloria Stern, and she explains that she has been searching for Wynona Sue Lehough, namely, Henrietta’s mother. Though Dr. Stern admits that the last time she saw Henrietta’s mother was three years ago, because she is “downsizing her practice,” she suddenly is concerned about Wynona Sue’s whereabouts and wants Henrietta, listed on old paperwork as Wynona’ Sue’s “next of kin,” to find the so-called missing woman, who has been without her meds for a period of years by then. Unbeknownst to Dr. Stern, right at that very moment, Henrietta’s mother is trying to reach her via her daughter’s “eye-phone.”

Dr. Stern has some rather potentially serious news to tell Henrietta. Based on her knowledge of Wynona Sue’s somewhat flighty and unstable mental state, Dr. Stern says that she believes Wynona Sue likely is responsible for having killed her husband, Henrietta’s step-father, Professor Alexander Lehough. As it’s also been reported that Wynona Sue fired a gun into the floorboards of her house, when her husband of five years plus was underneath the house tending to some of his insect “pets,” that idea is not, in theory, beyond the realm of possibility.

As with the other novels featuring Henrietta Hebert in Simon Plaster’s ongoing series, much of the fun and humor of Reprise comes from the intertwining complicated plots, romantic, or imagined romantic, entanglements, and numerous recurring characters within its pages. Another of the many fun aspects about Simon Plaster’s novels is that he incorporates song lyrics into his plots, with quotes from the songs relevant to the story interspersed throughout.

Reprise follows suit, the very title of it being a musical term for, as the author puts it,: “a partial or abbreviated repetition or reiteration of material with added ornamentation to decorate a line of harmony: sometimes including contrapuntal compositions called fugues, in which short melodies or phrases are introduced by one part and successively taken up by others in interweaving parts such as common in doo-wop songs.”

Besides quoting from songs such as John Cougar Mellancamp’s “Jack and Diane,” and Johnny Cash’s “I’ve Been Everywhere,” the author utilizes a radio announcer who repeats the words “Remember when….” followed by his introducing an oldie but goodie like “Duke of Earl.” The theme of repetition for helping to recall memories is one that Plaster uses in the plot of Reprise, as well, bringing into the mix of the present-day plotline several memorable characters from past novels in the series. The book is divided up into five distinct sections, or “Fugues.” These Fugues aid in conveying the repetition theme, and also serve to catch up any readers who might not be familiar with the past books in the series.

Don’t worry, there is plenty of action and romantic entanglements in the present-day plotline of Reprise to satisfy anyone who enjoys reading light-hearted satirical novels. If you are already a fan of the Henrietta Hebert series by Simon Plaster or a newbie to it, you’re sure to get an immense kick out of reading Reprise. I highly recommend you check it out, today, and the other novels in this hugely entertaining series!