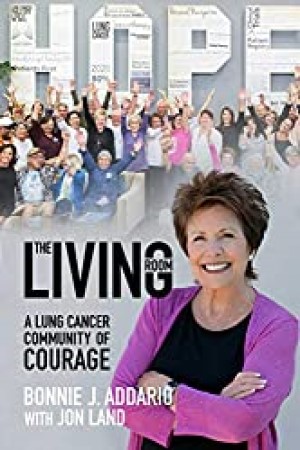 As you’ll learn in THE LIVING ROOM: A Lung Cancer Community of Courage, though, the book’s author Bonnie Addario is not one to give up. Diagnosed with stage 3B lung cancer at age 55 in 2004, the hard-charging Addario, a genuine force of nature, took on the disease with the moxie and resolve of an underdog boxer facing down the champion in the center of the ring.

The upset she ultimately scored is wondrously chronicled in THE LIVING ROOM, along with the stories of twenty other survivors of advanced stage lung cancer. I plunged into this book figuring it must be more fiction than fact. After all, other than the occasional miracle, no one ever beats lung cancer, right?

As we learn in THE LIVING ROOM, lung cancer has very much become a survivable and manageable disease—not always, but often enough to provide hope where none existed just a few short years ago. But that’s not the only surprise the book offers and not all of them are nearly as positive. Did you know more non-smokers get lung cancer than smokers? How about the fact that many of those non-smokers are under the age of thirty?

Neither did I. THE LIVING ROOM, named after a decade-plus in-person (and now virtual as well) support group Addario started, is a myth-buster of the highest order in that respect. And that’s mostly a good thing, as we get to know the survivors profiled as if they were long-lost friends.

Like Gina Hollenbeck, a not yet forty-year-old and the non-smoking mother of two boys, who looked the picture of health when she walked into the ER holding her X-rays under her arm and had to convince the doctors that something was seriously wrong with her. Or Matt Hiznay, a lifelong nonsmoker was only twenty-four when he was diagnosed with lung cancer. Early treatment saved his life. Then there’s Juanita Segura, a 51-year-old healthy eater and active in a training regimen known as CrossFit. The first doctor diagnosed her with asthma and prescribed an inhaler. Then the wheezing turned into a horrible cough. The next doctor had to deliver the news that she had lung cancer.

The positive nature of those profiled is truly mind-boggling, making this is the perfect book for someone living with cancer of any kind, not just lung, as well as those close to them—in other words, just about everyone. THE LIVING ROOM is a seminal triumph of storytelling that tugs at our heartstrings even as it brings a smile to our lips with its overriding message of hope over despair and triumph over tragedy. When it comes to books that matter and bear long-lasting relevance accessible to tens of millions, this one is off the charts.