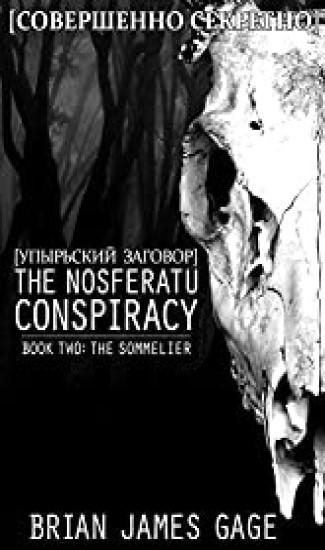 The Sommelier is the second book in The Nosferatu Conspiracy series by Brian James Gage. A synopsis of the first book, The Sleepwalker, provides an excellent framework for readers in this riveting, chilling, and hair-raising tale that is both unsettling and addictive. Purchase Here.

German Emperor Kaiser Wilhelm II, the ruler of the Prussian Empire, is working toward world domination and searching for the bottle of Vlad Dracula’s blood so that he and his mistress can achieve immortality and conceive a superior and untouchable child personified by evil. Augusta, Wilhelm’s wife, has stooped to devious measures in the hopes of stopping the mistress from becoming her successor.

Creatures with supernatural abilities and powers also want to obtain the bottle of blood along with an enchanted sword for their own nefarious reasons. The warlock in possession of the items is on a quest to find and protect Prince Felix Yusupov. Felix and his best friend, Rurik Kozlov, have left Saint Petersburg, Russia, for Bucharest, Romania, to settle a score and keep loathsome individuals, vile creatures, and demonic entities from succeeding in their gruesome activities. They are armed with the necessary equipment and supplies to help protect themselves from physical attacks caused by supernatural means. In their travels, challenges greet them at every step along the way, with their lives constantly in jeopardy. They run across allies who possess magical abilities, which are utilized in facing off against bloodthirsty beings with grotesque appearances and sadistic intentions.

Gage has penned a gut-wrenching thriller packed with heart-pounding twists and non-stop action. It is split into three parts, each with thematically relevant titles that superbly tie the story together. Chapter headings include the date and time relevant to when events take place. Some headings also include excerpts about covert activities involving the top echelon of the Kingdom of Prussia, a clipping about unlawful acts covered in a once publicized Berlin newspaper, and a German fairy tale centered around a witch in the story. The author has created a diverse cast of characters who possess a unique variety of personality traits, special powers, and unforgettable physical characteristics. The depiction of brutal acts of violence and spine-tingling fight sequences fits in well with the characters involved in situations that could have a favorable or unfavorable outcome.

Gage has written a thriller that will keep readers thoroughly engrossed and give them goosebumps. The English translation is provided for foreign words and phrases. Scattering of profanity throughout the book is used judiciously and suits the characters. At the end of the story, Gage includes a brief overview of what will transpire in The Last Seraph, the conclusion to a blood-curdling series that is not to be missed.

Teaser for The Nosferatu Conspiracy: Book Two, The Sommelier

3 minute featurette for The Nosferatu Conspiracy: Book Two, The Sommelier