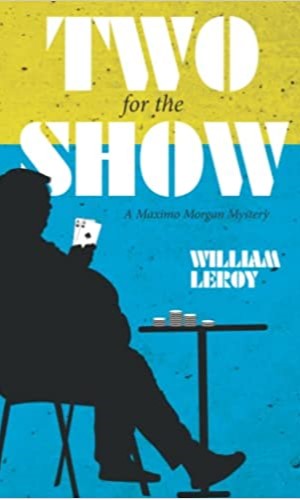 Two for the Show: A Maximo Morgan Mystery, by the talented author, William LeRoy, combines the best of two literary genres, detective mysteries and satire, into one thoroughly enjoyable and page-turning read that is sure to please fans of both genres. Borrowing its title from a poker term, Two for the Show features Maximo Morgan as its main character. Hopefully, there will be many more of them to come. Purchase Here

What does Maximo know about poker? Very little, to nothing; but, that does not deter him from taking a case involving said game when he is approached by a dame in distress, Leona Morris, who hires him to use all of his deductive powers to figure out what (and who) put her husband, Buckley, into the hospital, with a blow to his head he received either before or after what appeared to be a hit-and-run accident. Though Buckley had been in a jogging suit, he had also been wearing a black ski mask and had black shoe polish on his face.

Besides these irregularities, the dame, Leona, also wants Morgan to get to the bottom of why the other regular pokers players who are Buckley’s friends (the so-called “Motley Crew”) so strongly desire to continue playing poker in her basement, even though Buckley is recovering from his injuries and is unable to join them.

The Motley Crew, who Buckley refers to as the “Losers’ Club,” because they consistently lose to him whenever they meet together and play in his basement, claim that Buckley would want them to continue playing, but Leona is convinced that they have an ulterior motive other than the bond of friendship and soon, Morgan is soon hot on the case. He and his smart-aleck also overweight protégé, who is quick to remind Max of the detective’s vast ignorance of poker, are influenced by the cases of famous detectives, most especially those of Brad “The Fatman” Runyon, as they attempt to solve the Case of Rats in a Basement.

Morgan has a lot on his plate, so to speak, in Two for the Show. Besides various complications that arise, such as Morgan’s discovery that the Motley Crew has been possibly digging a tunnel under Buckley’s basement or through a basement wall, a femme fatale, Billie Jean Biggs, seems to have revenge on her mind against the members of the Motley Crew. The big-breasted beauty, who has a somewhat peculiar “beauty mark,” in the form of a mole between her eyebrows, adds both to the sly sense of humor that pervades Two for the Show and to Morgan’s solving the rather odd case.

Anyone who enjoys reading mysteries with a blend of satire thrown in for good measure will get a kick out of checking out Two for the Show by William LeRoy. Split up into sections over a period of four days, Thursday, September 29, through Sunday, October 2, of 2022, Two for the Show is a page-turning book that is sure to tickle your funnybone. I highly recommend it, and with any luck, we’ll see many further Maximo Morgan Mysteries in the near future!