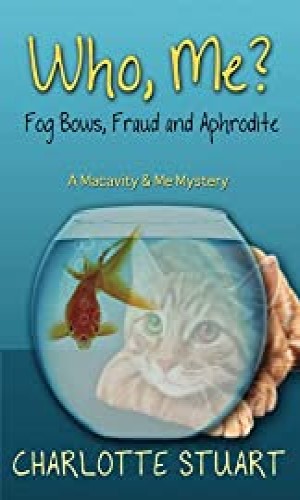 Who, Me?: Fog Bows, Fraud and Aphrodite is a classic who-done-it. Bryn Baczek is a consultant living on a boat in Seattle with her strong-willed cat Macavity and an ailing goldfish who is fourth in line to the name of Bubbles. Due to too much coffee resulting in a late-night need to use the bathroom, Bryn overhears a heated argument on a neighbor’s boat, followed by a splash and silence. Purchase Here.

From there, Bryn is not-so-reluctantly pulled into a mystery involving a missing woman, Captain America pajamas, questionable taste in art, scuba diving in the dark, a non-profit organization, a post-it note, a poker game, a stuffy auditor, and a pseudonym. While Bryn tries to play the part of a witness who is just trying to do her duty for justice, it is clear that she is very much enjoying her chance to play Sherlock Holmes. Bryn takes the one loose thread that lies in front of her and keeps pulling until the whole sweater has come unraveled. While Bryn continues to share her knowledge with the police throughout, she does so only after investigating each clue herself.

Charlotte Stuart presents us with a fun mystery, which, despite moments of darkness, generally plays as a light-hearted caper. Stuart has created well-rounded, intriguing characters to populate her story. Told from the first-person perspective, we get a thorough look into Bryn’s psyche and discover more about her than she is even willing to admit to herself.

It is easy to get caught up and swept along in the narrative. Bryn’s enthusiasm for her independent investigation is contagious and makes the book difficult to put down. With its relatively short length, it can be easy to end up going cover to cover in a single day as Bryn tries to narrow down the list of suspects.

In Who, Me? Fog Bows, Fraud and Aphrodite, Stuart gives us the perfect mystery to wrap up with on a dark rainy day. An ideal novel for a read while wrapped up in a blanket and drinking a nice hot beverage. Especially, if you live on a houseboat.