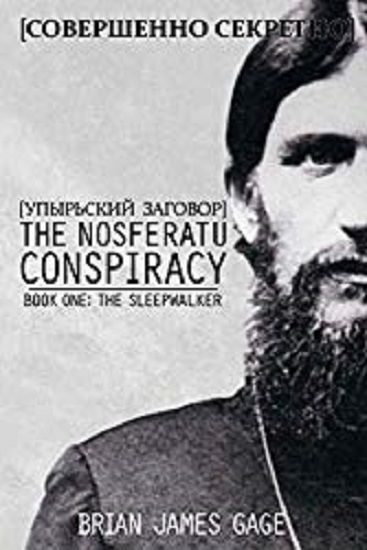 The Nosferatu Conspiracy: The Sleepwalker is the first book in a new series that takes place in both Romania and Saint Petersburg, Russia. Brian James Gage has written a gripping, edge-of-your-seat supernatural thriller with his own interpretation of Russian history involving Grigori Yefimovich Rasputin and the Russian Imperial Romanov family during the reign of Tsar Nicholas Aleksandrovich Romanov II. Rasputin, a powerful and deceptive vampire with extraordinary, otherworldly abilities, has orchestrated an elaborate scheme that will enable vampires to rule the world and use the human population as a food source. Members of the Romanov family are crucial to the success of Rasputin’s game plan. Vampire hunters with special weapons are trying to thwart Rasputin’s efforts in his promise of victory for bloodsucking evil beings to triumph over humankind. The hunters face a time-constraint for trying to put a stop to this calamitous undertaking. Who will be the victor? Will humans serve as vampires’ food supply or will humans destroy any chance of vampires running rampant? Purchase Here.

This nail-biting and electrifying story is split into three parts, each with thematically relevant titles that wonderfully tie the storyline together. Chapter headings include the date and time, which are important to the story in the countdown to either the successful or unsuccessful implementation of Rasputin’s goal. Some headings also include quotes from a vampire bible written by “Vlad Draculea”, diary excerpts from a Romanov family member, and newspaper clippings. It is easy to keep straight the myriad of individually distinctive characters in the story, and all of the minor characters are important in supporting the development of the plot. The transitions between past and present events are handled seamlessly. Descriptive writing by Gage’s use of vivid details, figurative language, and sensory information draws readers into this fascinating rendition of events surrounding Rasputin and the ending days of the Romanov Dynasty.

The Sleepwalker incorporates historical figures, religious officials, seers, malevolent entities, underground sects, political revolution, familial love, friendship, odious conflicts, treachery, secret plots, and gory/graphic violence. It is full of nonstop tension with unpredictable twists and turns that explodes into a spine-tingling climax. Gage does a thorough job of explaining Romanian folklore about vampire-like creatures, which is extremely helpful for anyone unfamiliar with these mythological beings and their powers. The English translation is provided for the words and phrases that are written in an appropriate foreign language for the story. The Sleepwalker forms an auspicious beginning for a new series. At the end of the book, Gage includes a brief overview of what will transpire in The Nosferatu Conspiracy: The Sommelier, which is the second installment in the series.