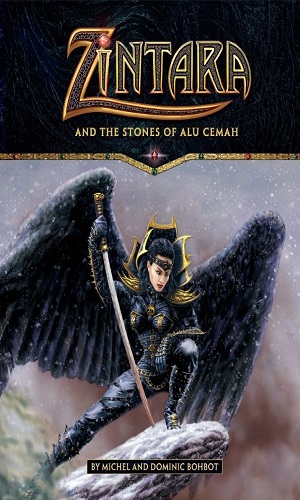 The debut novel from brothers Michel and Dominic Bohbot is a dynamic fantasy tale inspired by the love of speculative fiction instilled in them by their father. This is seen not only in the dedication of ZINTARA AND THE STONES OF ALU CEMAH but also throughout the narrative.Purchase Here.

We are taken to another world, one that contains mythical and imaginary creatures alongside human characters. There is a synopsis of many of the characters at the start of the novel and I admit I had to turn to it several times during the reading as there are a lot of names and relationships for the reader to juggle. The Prologue finds a young Zintara, human in all features aside from the great black wings that thrust out from her back, being sent away by her mother as her family and their empire falls in a violent manner. The antagonist of this tale, Korban — human warrior and sorcerer — is on a quest for the three Stones of Alu Cemah which will purportedly bring him the ability to rule over all.

Zintara is taken away by M’Hancha, best friend of her late father, who raises her and keeps her safe. We see Zintara grow into a young woman, her magnificent wings now displaying a mighty span. She is confronted by Korban, in possession of one of the three stones, and threatens to kill her the way he took her mother’s life if she does not give him the location of the remaining stones. Zintara gets away, but the battle with Korban costs him his hand — a deed he will no doubt seek to avenge to the fullest.

As Korban plots to find the other two stones M’Hancha is trying his best to protect Zintara from further confrontation. He also seeks to keep her away from Prince Ardelann, heir to the realm of Takla, and the burgeoning romance that seems inevitable between them. It is not long before a member of their realm, the nefarious Duke Galhuri, outs Zintara and calls her a winged demon and traitor. He holds in evidence a casket containing a bloody feather allegedly coming from Zintara and proof that she attacked the ailing Prince Ardelann. Zintara has no choice but to flee — on a mission to clear her own name and prevent Korban from obtaining the remaining stones.

M’Hancha advises Zintara to hide in the islands where she will be safe but still within his reach. It is here where she literally finds herself and this includes a meeting with an ancient dragon who assists her in recognizing her destiny. Meanwhile, Korban has become successful in his villainous quest for the Stones of Alu Cemah. To show the power they wield his first act is to create a monstrous armored warrior — a small taste of the abilities the demented sorcerer now possesses. The narrative drives forward towards the anticipated showdown between Zintara and Korban. He arrives riding an impressive dragon steed and, wearing a glove that calls to mind Thanos from Marvel comics, displays the three stones that give him power so mighty that Zintara may not be able to overcome it.

The Bohbot brothers are said to be at work on the next novel in this new series which should continue the saga of Zintara. ZINTARA AND THE STONES OF ALU CEMAH is an entertaining first effort as a novel, but for me the real winner is the outstanding artwork by Michel Bohbot with illustrations that truly brings the tale to life with each successive page.